The band released their debut album Count Your Blessings in 2006. Upon release, the album’s sound polarised listeners, and was met with critical disdain. The band began to break away from their controversial sound with Suicide Season (2008), which was a creative, critical and commercial turning point for the band. Bring Me the Horizon released their third album, There Is a Hell Believe Me I’ve Seen It. There Is a Heaven Let’s Keep It a Secret., in 2010, propelling them to greater international fame.

Zombie’s first solo effort was a song titled “Hands of Death (Burn Baby Burn)” (1996) with Alice Cooper, which went on to receive a nomination for Best Metal Performance at the 39th Annual Grammy Awards. In 1997, he began working on his debut solo studio album, Hellbilly Deluxe, which was released in August 1998.  Hellbilly Deluxe went on to sell over three million copies worldwide and spawned three singles.

The Used is an American rock band formed in Orem, Utah, in 2001. The group consists of vocalist Bert McCracken, bassist Jeph Howard, drummer Dan Whitesides, and guitarist Joey Bradford. The group signed to Reprise Records and rose to fame in June 2002 after releasing their self-titled debut album.

Chevelle has sold over four million albums in the United States. The band’s first studio album, Point #1, was released on a small record label called Squint Entertainment. Chevelle’s second album, Wonder What’s Next (2002), was certified Platinum by the RIAA after a debut at No. 14 on the United States albums chart, Billboard 200. 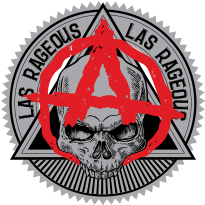 2-day admission to the festival

HOW OLD DO I HAVE TO BE TO ATTEND THE EVENT?

This is an all ages event. Attendees 5 years and older must have a ticket.

WHAT IS THE WIFI SITUATION?

FREE WIFI WILL BE AVAILABLE ON SITE.
LOG IN TO LAS RAGEOUS.

WHAT IS THE PARKING SITUATION?

WHAT CAN’T I BRING INTO THE FESTIVAL?

WHAT TIME DOES THE EVENT START AND END EACH DAY?

WHERE WILL THE EARLY ENTRY BE FOR THE VIP AND WHAT TIME SHOULD WE PLAN TO ARRIVE?

AT THE VIP ENTRANCE. 3:00PM ENTRY EACH DAY

WILL ALCOHOL BE SOLD?

YES TO THOSE 21 YEARS OF AGE AND OLDER WITH VALID ID.

WHERE SHOULD I STAY?

THERE ARE GREAT HOTELS LOCATED IN DOWNTOWN LAS VEGAS WITHIN A 5 MINUTE WALK OF THE FESTIVAL SITE. OR, IF YOU STAY ON THE STRIP IT’S A 5-10 MINUTE CAB RIDE.

WILL THE VENUE HAVE ATMS?

WHAT SIZE WATER BOTTLES ARE PERMITTED THIS WEEKEND?

ONE UNOPENED WATER BOTTLE UP TO 20OZ

WHERE WILL TICKETS BE AVAILABLE FOR PURCHASE THE DAY OF THE FESTIVAL?

TICKETS ARE AVAILABLE ON-SITE AT THE BOX OFFICE.

TICKETS ARE ON SALE NOW!

LAS RAGEOUS RETURNS TO THE DOWNTOWN LAS VEGAS EVENTS CENTER WITH A STACKED LINEUP OCTOBER 18 & 19. TICKETS ARE ON SALE NOW! SIGN UP BELOW FOR UPDATES AND EXCLUSIVE ACCESS TO SPECIALS!

By submitting this form, I agree by electronic signature to: (1) be contacted by SMS text at my mobile phone number and by email (Consent is not required as a condition of purchase); and (2) the Privacy Policy and Terms of Use.